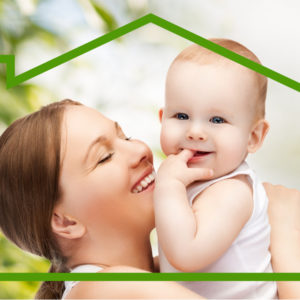 The number of babies being born into families living in rented accommodation more than doubled across Northern Ireland between 2007 and 2017.

That’s according to analysis of relevant data carried out recently by the insurance firm Royal London, which has highlighted the increasing extent to which families throughout the UK are relying on rental properties and can’t get on the housing ladder.

Across the UK as a whole, roughly one in two babies being born now enters a family that doesn’t own its own home, while the corresponding figure for 2006/07 was closer to one in three.

The proportion of people starting families while living in rented accommodation has increased in all regions of the UK but most notably in the North East of England, in Yorkshire and in Northern Ireland.

In Northern Ireland, there is believed to have been a 123 per cent rise in the number of babies being born into families that rent their homes between 2007 and 2017.

Reflecting on its own investigations, Royal London has said that renting has become an increasingly long-term way of living for a great many people in the UK and one that is by no means confined to young people saving up for housing deposits.

“Renting is an increasingly long-term tenure and it’s increasingly impossible to escape from,” said Becky O’Connor, a personal finance expert at Royal London.

“For people in their late twenties and thirties, half of whom are starting families in insecure accommodation, not having a home of their own is fraught with practical and emotional issues,” she said. “The main risk is eviction, which hangs threateningly in the background of normal family life.”

Royal London has also pointed out that renting tends to be more expensive on a monthly basis than making mortgage payments, which can make it more likely that renters will find themselves not just struggling to get on the housing ladder but also experiencing more general financial difficulties as well.

If you live anywhere in Northern Ireland and you’re finding it tough to cope with your personal debt problems then Northern Ireland Debt Solutions can help. Contact us directly to arrange a FREE and confidential consultation.