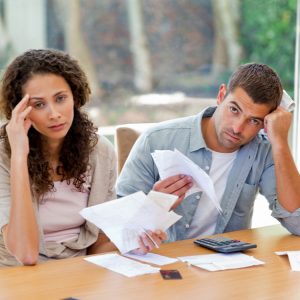 Adults living in Northern Ireland are more likely than their counterparts elsewhere in the UK to be in a position of over-indebtedness.

That’s according to figures compiled by the Financial Conduct Authority (FCA), the UK financial service sector’s main regulatory body, which has been investigating how people in different regions of the country handle their money and interact with financial service providers.

Across the UK as a whole, the proportion of people considered to be over-indebted is around 15 per cent, whereas in Northern Ireland that figure is closer to 20 per cent.

Adults in Northern Ireland owe an average of £3,990 in unsecured debts to creditors, which is a higher figure than any recorded for any other region or nation within the UK.

According to the FCA’s data, it is also the case that people in Northern Ireland are more likely than most British citizens to have savings of no more than £5,000.

Close to two thirds of Northern Ireland residents don’t have £5,000 or more in savings, while that can only be said for 57 per cent of adults living across the UK as a whole.

The proportion of people who live in Northern Ireland and consider themselves to be “in difficulty” as far as their debts and their personal finances is concerned is roughly 10 per cent, which is very similar to the UK average.

However, there is a relative lack of confidence within Northern Ireland when it comes to financial capabilities in general and only 26 per cent of people living in the province would describe themselves as being “highly confident” when it comes to managing their money.

A total of around 13,000 people were polled by the FCA on a wide range of money-related matters in support of its newly published ‘Financial Lives’ report.

Among a myriad of findings uncovered, it was established that people across the UK who live in urban areas are generally more likely than their countryside dwelling counterparts to have high levels of debt and to use high-cost loans.